Today’s guest is Tricia Sullivan, SF author, winner of an Arthur C. Clarke award for Dreaming in Smoke. Tricia’s books were highly recommended to us by the Extraordinary Karen Mahoney and when we learnt about her upcoming SF YA novel Lightborn we were more than excited (and the book is great -review later today) and invited the author to talk about some of her Inspirations & Influences.

This is what she has to say – please give it up for Tricia!

When Ana and Thea offered me the opportunity to write a piece for Inspirations & Influences, I jumped at the chance—and immediately froze. I knew that at the root of Lightborn were my experiences of pregnancy, childbirth, and breastfeeding—but how could I say that? Shouldn’t I be talking about technology, or worldbuilding, or the cultural conditions of 21st Century America as a psychopharmacopia? After all, the actual text of Lightborn? has nothing to do with pregnancy.

The lightborns, or ‘shine’ of the title are agents of psychological change that are delivered on light waves. In the story, two teenagers try to save their city and themselves from the ravages of a disaster in which dangerous lightborns wreak havoc on the adult population. Thematically, Lightborn also deals with what it means to hold on to your individuality in the face of massive pressure to join the group-think. And it’s about some implications of the ideas Stephen Wolfram introduced in his giant tome A New Kind of Science, in which he discussed possible characteristics of emergent intelligence, including the likely incomprehensibility (to us) of alien or artificial life forms.

Linking all of this to having babies seems like a tough one on the surface of things, but really it’s pretty straightforward. To start with, being pregnant can be a fairly science fictional trip to take. Each time I did it, strange things happened to my body and mind. Sickness, exhaustion, loss of focus, fear of stepping of a curb. Crying at really lame but maudlin TV ads. Loss of focus. Inability to see my feet, obviously. Varicose veins, near-blackouts anytime I stood up, unseemly cravings for bacon, loss of balance, forgetfulness, loss of focus. Did I mention loss of focus? And forgetfulness? Oh, yeah.

The changes weren’t limited to me—pregnancy actually morphed the world into something unfamiliar. The outside world was completely different. Hazards and intrusions were everywhere. Noises were louder, cars drove too fast, people were ruder—in fact, totally insensitive. The news was so appalling I couldn’t watch it.

It’s not just pregnancy. In fact, stuff gets funkier when the offspring arrive and start controlling ur mind from w/in with that biological bonding thing they do.

Science fiction has a pet fantasy about technology that goes something like this: sod our bodies! We can reconstruct them, rebuild them, mechanize them! Better, faster, stronger! And plus? We can, like, upload ourselves for virtual partytime lasting into the indefinite future. Yay!

I’ve always had a few itty bitty probs with this mind-over-meat paradigm. I mean, sure the brain’s a physical construction, but the mind exists in communication with the rest of the body and (through our senses) with the world, as well as with previous iterations of itself across time. Neurologically speaking, our perception of the world is shockingly indirect. So the idea of a technology that would attempt to abstract our intellect from our physical form is incredibly uninteresting to me.

But I am interested in Wolfram’s law of computational equivalence, in which humanity’s ability to perceive other orders of intelligence is shown to be limited by our failure to identify patterns beyond a certain level of complexity. I am interested in the idea that other intelligences could be among us, even, and we might not know it.

All of that stuff I just said is theoretical, speculative in the extreme. In Lightborn I wanted to get at the things I could feel and sense. During my years as a new mother I was certainly conscious of the loss and alteration of my individual identity in the presence of the needs of others: my babies. So I focused on the question of what would it feel like, to interact with a new intelligence that came from us but was not us? What would it be like to actually bring it into the world, personally?

And there you have it. Science fiction, Mama-style. That’s where I’m coming from with Lightborn.

You can learn more about Tricia here. 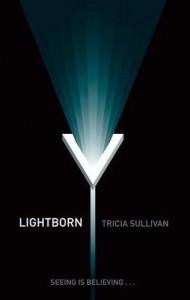 Lightborn, better known as ‘shine’, is a mind-altering technology that has revolutionised the modern world. It is the ultimate in education, self-improvement and entertainment – beamed directly into the brain of anyone who can meet the asking price.

But in the city of Los Sombres, renegade shine has attacked the adult population, resulting in social chaos and widespread insanity in everyone past the age of puberty. The only solution has been to turn off the Field and isolate the city.

Trapped within the quarantine perimeter, fourteen-year-old Xavier just wants to find the drug that can keep his own physical maturity at bay until the army shuts down the shine. That’s how he meets Roksana, mysteriously impervious to shine and devoted to helping the stricken.

As the military invades street by street, Xavier and Roksana discover that there could be hope for Los Sombres – but only if Xavier will allow a lightborn cure to enter his mind.

Courtesy of Orbit, we have THREE copies of Lightborn up for grabs! The contest is open to ALL and will run until Saturday, October 9 at 11:59 PM (PST). In order to enter, leave a comment here letting us know what YOUR favorite Science Fiction novel is. Only one entry per person, please! Multiple or duplicate entries from the same IP address will be disqualified. Good luck!