This is our brand new segment in which our delightful buddy Harry, from Temple Library Reviews will be joining us once a month to review paranormal romance from a guy’s perspective. But we will let him introduce himself, please let’s give a warm welcome to Harry! 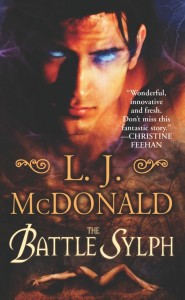 Stand Alone or series: First book in a new series

He is one of many: a creature of magic, unrelentingly male. He is lured through the portal by pure female beauty, a virgin sacrifice. When she is killed, he is silenced and enslaved.

Such a dark ritual is necessary, you see. Unlike their elemental cousins-those gentler sylphs of wind and fire-Battlers find no joy in everyday labor. Their magic can destroy an army or demolish a castle, and each has but one goal: find a Queen, then protect and pleasure her at all costs. What would a woman do if she were given such a servant, and what would befall any kingdom foolish enough to allow a Battler to escape?

Young Solie and the people of Eferem are about to find out.

Why did I read the book: The premise sounded intriguing. Ana sounded ecstatic and when her reader-sense is tingling, it means something good will happen. The cover is also mucho impressive with those glowing eyes and the woman sprawled below the title. Certainly a looker that one.

How did I get the book: Ana [book-pimp extraordinaire] tied it to a balloon and asked a flock of geese to deliver it to me. That is a lie, but it would have taken less than with snail mail post.

My christening review for this mighty feature has not been the funny and good-feel bang I hoped for. To be quite honest ‘Circle of Fire’ shoved me outside in a blizzard. I needed a book to turn the heat up, burn down the house and fire me up. Thankfully ‘The Battle Sylph’ is just the right novel to help you lower your heating bills and is way better than the hot-water bottle you bring to bed. Every page is soaked with either adrenaline or naughty kerosene for the nether regions… of your imagination [naturally, what did you guys think I was going to say?]

Did I hook you? I hope so. Because, there’s much to enjoy in ‘The Battle Sylph’. As the genre suggests this is romantic fantasy, so no leather boots, guns, mean SUVs and vampires or any other standard magical race. Instead, we have swords, sturdy warriors, a queen and a race of spirits, who can become corporal and incorporeal, whenever they please. While it is true that fantasy hosts a romantic subplot almost always, the way the sex scene is mandatory for every single major Hollywood, the relationship usually remains in the background and is not central for the conflict. And it is not steamy, either.

‘The Battle Sylph’ offers the best from the medieval traditional fantasy with its quests, parties of brave heroes with a noble cause and a dastardly nemesis figure, while merging it with quite the liberated sexual attitude and a central relationship, which triggered the events in the book. The balance is solid and achieved by integrating sex into the worldbuilding, which evades the hazard of this becoming a book, where sex randomly flies around and is neither relevant, nor of any use to the plot. As the reader [you, because you have to have this book] discovers, the sylphs are spirits from a different plain, which live together in hives and divide into several subspecies, according to their status and function in the hive. There are elemental sylphs. Fire, water, earth, air. There are healing sylphs and there are also battle sylphs otherwise called the battlers. Every subspecies, excluding the battle sylphs, are female. The battlers are the soldiers in the hive and exist for war and sex, since they are the only males. The sole female to receive their affections is the queen of the hive, which makes them highly competitive and aggressive towards each other. The mythos in ‘The Battle Sylph’ helps the reader identify the mutual traits and the justification behind the behavior of all the battlers in the novel such as Heyou, the youngest battler and main protagonist, Ril and Mace. The dynamics and the hierarchy are fascinating to rediscover, because sylphs in general have no known mythological and popular role attached to them and this rendition steals the show, so to say.

Because sylphs in general require a connection with a human master in order to exist in the human world, the novel is rich in diverse relationship dynamics and scenarios. Beyond the usual human-human interaction with all the classic elements and tropes, such as friendship, betrayal, loyalty, subordination and defilement, readers are also treated to mandatory master-sylph episodes, which are as diverse as the individual characters. McDonald features cold hearted masters with a sadistic streak towards their sylphs, benign masters with a liberal mind, who break some rules and grant some freedoms to their sylphs and masters, who stray away from established models and allow their sylphs to act as they wish, relying on cooperation rather than servitude.

Although Solie and Heyou are the central couple, a queen with her battle sylph, their roles and the story attached to them would ring a bell. Solie is the first woman to break a monopolized by men tradition, by being bound to a battle sylph. Heyou is the young inexperienced battler, who must stand against many a challenge. That aside, the chemistry between these two feels very much real and volatile. However, the real emotional intensity lies in the human-sylph interactions between Leon, the king’s head of security and a dirty trick man, and his battler Ril and Jasar, member of the spoiled elite with many connections and an insufferable ego, and his battler Mace. Leon and Ril walk on the path of guilt, redemption and forgiveness, after it becomes clear that the female sacrifice used in the summoning ritual was actually the reason the battlers crossed plains and her death results in madness for the sylph and hatred towards the master, who remains clueless. Leon’s devastation upon learning the truth is raw and heartfelt, while Ril’s hatred and painful denial is also powerful to read. Mace is less fortunate with his master Jasar, whom you would love to hate and kill, if you were a character in the story. Mace has to endure his master’s depravations, toxic and demanding personality and amoral orders in silence; a bond from which he cannot escape and threatens to add a horrific twist in the resolution.

As you see, ‘The Battle Sylph’ is the Horn of Plenty. From page one you are assaulted with so many flavors, excitement and adventures that you may need some time to adjust. This is my issue with the book. It is taking a non-stop staccato story and playing it double time. There are almost no natural pauses for the reader to rest and by the end of the journey, I was as exhausted as the characters and mind you, I never even had to raise a sword or survive almost certain annihilation. This unnatural speed to dash to the finish line coupled with the lightning quick POV changes might result in some confusion, but overall these two issues do not steal from the quality of the storytelling, prose or creative prowess.

Verdict: I wanted to be sassy, humorous and witty, but quite frankly writing this review sapped completely. There are at least a few thousand words more I wanted to say, but this is a review and not a thesis. In a few words though, ‘The Battle Sylph’ is a winner for sure. A power exercise for your brain’s endurance, but the benefits outweigh the minor inconveniences along the way.

Reading next: Demonkeepers by Jessica Andersen