Smuggler’s Ponderings: On Books I Do Not Finish

Being here and writing reviews almost every day, reading other blogs and other reviews often make me ponder about the act of reading itself, and how I approach books and eventually how I review them. It also makes me realise how much my life has changed and how it affects my reading and talking and pondering about these things is important – at least it is important to me, hence this post.

I don’t finish all the books I start. I used to, I used to fight my way through books till the bitter end but not any longer. This I think, reflects the changes that I have gone through as a reader since we started the blog and is a confluence of 1) being more aware of my tastes as a reader and 2) the availability of other books to replace the one I did not finish with. Both factors are undeniably connected with blogging about books.

The former because I deeply think about what I read on a daily basis and why I like or dislike a book and it is easier for me now to recognise when a book is not working for me and why to continue reading it is an exercise of futility; the latter is something more physical: I have a To Be Read mountain of books readily available for me to tap into. These are books that I both bought (and I buy a lot of books) and received for review from publishers or authors. Before starting the blog, my TBR was minimal, now it contains more than 300 books. Knowing that they are there, that there are loads of books waiting to be read makes it definitely easier for me to quit reading a book, so there is that to be taken into consideration. But that decision does not come lightly.

There are several reasons why I do not finish a book and they vary wildly: it could be because the writing is uninspiring or the characters don’t ring true. Or because the worldbuilding is not interesting or lacks inherent logic. I am not above pet peeves either, and sometimes even one little thing will make me put the book away for good. Sometimes I quit a book only after a few pages, sometimes it takes me way longer.

Above all though, the majority of books I do not finish these days are those that fall in that more middle range category of books: the ones that I hardly care about, one way or the other. Which means that sometimes I will finish a book even when I think it is REALLY bad or when it revolts me. Part of it comes from the fact that I want to be able to properly review them and I feel I can only do that if I finish reading them because I need all the ammunition that I can get.

In terms of examples, here are some recent books I could not finish and the reasons why:

Grace Divine—daughter of the local pastor—always knew something terrible happened the night Daniel Kalbi disappeared and her brother Jude came home covered in his own blood.

Now that Daniel’s returned, Grace must choose between her growing attraction to him and her loyalty to her brother.

As Grace gets closer to Daniel, she learns the truth about that mysterious night and how to save the ones she loves, but it might cost her the one thing she cherishes most: her soul.

The Dark Divine is yet another (bad) example of paranormal romance that follows in the Twilight mania and it has basically the same format: (extra super) good girl falls for bad, dark, mysterious boy who has a Secret. Full of contrived, supposedly suspenseful plot elements (at one point the heroine is given the answers to the mystery in the format of letters but she kept putting off actually reading them) with a non-descript blank page heroine who will do anything for the boy regardless of how he treats (or mistreats her) and the writing was incredibly cheesy and formulaic. I read very far into the book (255 pages out of 375) because I hoped to review it but couldn’t muster the will to keep reading: I just didn’t care enough.

It begins with an explosion. Another day, another bus bomb. Everyone it seems is after a piece of Turkey. But the shockwaves from this random act of 21st century pandemic terrorism will ripple further and resonate louder than just Enginsoy Square.

Welcome to the world of The Dervish House; the great, ancient, paradoxical city of Istanbul, divided like a human brain, in the great, ancient, equally paradoxical nation of Turkey. The year is 2027 and Turkey is about to celebrate the fifth anniversary of its accession to the European Union; a Europe that now runs from the Arran Islands to Ararat. Population pushing one hundred million, Istanbul swollen to fifteen million; Turkey is the largest, most populous and most diverse nation in the EU, but also one of the poorest and most socially divided. It’s a boom economy, the sweatshop of Europe, the bazaar of central Asia, the key to the immense gas wealth of Russia and Central Asia.

Gas is power. But it’s power at a price, and that price is emissions permits. This is the age of carbon consciousness: every individual in the EU has a card stipulating individual carbon allowance that must be produced at every CO2 generating transaction. For those who can master the game, who can make the trades between gas price and carbon trading permits, who can play the power factions against each other, there are fortunes to be made. The old Byzantine politics are back. They never went away.

The ancient power struggled between Sunni and Shia threatens like a storm: Ankara has watched the Middle East emerge from twenty-five years of sectarian conflict. So far it has stayed aloof. A populist Prime Minister has called a referendum on EU membership. Tensions run high. The army watches, hand on holster. And a Galatasary Champions’ League football game against Arsenal stokes passions even higher.

The Dervish House is seven days, six characters, three interconnected story strands, one central common core–the eponymous dervish house, a character in itself–that pins all these players together in a weave of intrigue, conflict, drama and a ticking clock of a thriller.

I was incredibly excited about The Dervish House because of the rave reviews it got and because it was about time for me to try one of this author’s books. I managed about 80 pages (out of 463) before putting it down. I love the premise of the book, I love the setting. Istanbul is a city that I visited and loved and I felt that the author captured its vivacity rather well. However. I found extremely difficult to suspend disbelief and get into the particulars of the scifi aspects of the book. It is merely 15 years into the future and nanotechnology is everywhere in everyday life. Not only that, but I also I felt that – from the few pages I read, and I am aware that things might have changed later on – the setting trumped characters who seemed to superficially exist to enhance and explore the former. It just didn’t seem the kind of book I would enjoy and thus I stopped reading it. I am keeping the book though and might give it a try again in the future. 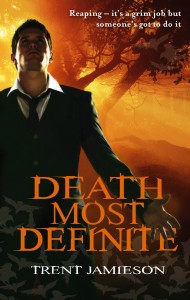 Steven de Selby has a hangover. Bright lights, loud noise, and lots of exercise are the last thing he wants. But that’s exactly what he gets when someone starts shooting at him.

Steven is no stranger to death-Mr. D’s his boss after all-but when a dead girl saves him from sharing her fate, he finds himself on the wrong end of the barrel. His job is to guide the restless dead to the underworld but now his clients are his own colleagues, friends, and family.

Mr. D’s gone missing and with no one in charge, the dead start to rise, the living are hunted, and the whole city teeters on the brink of a regional apocalypse-unless Steven can shake his hangover, not fall for the dead girl, and find out what happened to his boss- that is, Death himself.

Trying to read Death Most Definite was a MOST frustrating experience. I absolutely loved the premise with “death” and “reaping” as a business with corporate offices and everything. I loved the set-up in which reapers in Australia are being killed and the main character is one of the few survivors and goes on the run. Whilst on the run he has to not only copy with the death of his family and friends and the pending deathapocalypse but being the only reaper around means that HE, as a reaper, is the only one to help these people to cross over to the afterlife; plus he falls in love with a ghost and he can never touch her or she will just cross over. Also: zombies. With a story like this how could this book go wrong?

First of all: insta-love. That is one of my pet peeves: when a character falls for the other instantly by merely looking at them and starts talking about love and how they “just know” . It is what happens here. Another pet peeve: endless description of what a character wears, how long it takes to get dressed, etc. It is so very distracting and it slows the pacing of a story.

But above all, when a character, who is ON THE RUN, whose entire family (parents, uncles, aunts, dog) JUST died basically in his arms, who may be the only person still alive capable of stopping CHAOS and the END of the WORLD, find himself musing about: how beautiful the girl is in the light of the morning; or how in the thick of it, he has to change clothes and starts musing how his jeans are a bit loose around the waist. When that happens, I say it is time a book and I part ways. I did try to stick around for this one and read nearly half of it but my feelings can be summed up thusly: if the main character of the book is not THAT worried about the pending apocalypse, why should I be?

So, there you have it. Some of the most recent books that for better or worse, I didn’t finish reading. I put them away and never gave them another moment’s thought (until I started thinking about this post, that is) .

What about you? Do YOU always finish the books you start? If you don’t, what makes you stop reading them? And if you have a blog, do you review them anyway?