A Dude Reads PNR Double Feature: Scented Dreams & Where the Rain is Made

Welcome to another segment in our “A Dude Reads PNR” series, in which our delightful buddy Harry, from Temple Library Reviews joins us once a month to review paranormal romance from a dude’s perspective. Please give a warm welcome to Harry! 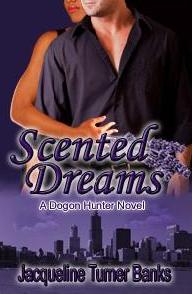 When Ian draws a hunting assignment in the Chicago area, he figures at least he can spend the time visiting the river casinos or getting some much needed rest. That notion changes when he gets his first look at his driver, the strikingly beautiful Nesta. They’re catapulted into a whirlwind weekend of danger, mystery, and the possibility of mind-blowing sex. Before long, Ian realizes the least of his problems are the bloodsuckers he’s traveled there to eliminate. Not just his life, but his sanity is threatened when their growing relationship is discovered by her protector, a very powerful being, and Ian is forced to take a stand. After recently dumped Nesta evaluates the appealing passenger in her back seat, she realizes that her fake engagement ring could be standing in the way of a fun weekend. Little does she know that forces are at work that promise so much more than she had in mind. Is it more than she can handle?

Title: Where the Rain is Made

A decadent-looking savage has captured Francesca DuVall and her brother, Marsh. Now she must spend every waking moment planning an escape. She didn’t count on the powerful draw of desire interfering with her scheme in the camp of the brutal Cheyenne dog soldiers.

Ethan Gray is a curator at a national museum…most of the time, but when he travels through time to help his beloved People he becomes Meko, leader of the most revered and feared tribe of the plains. Although their worlds are decades apart Meko can’t resist the dark beauty he kidnapped during a raid. He has many battles to fight but none he wants to win more than the one that will capture Cesca’s heart forever.

From the windswept plains of Colorado and the harsh life of a Dog Soldier to the placid life of a curator their love was fueled by passion and kindled by destiny.

How did we get these books: We received review copies from the authors.

This month’s “A Dude Reads PNR” won’t be all that much fun, because this is a double feature of DNF. The first time I have to drop reading a book [two books in this case] before I reach 50 pages, and it’s unprecedented. Normally, I would push through to at least 50 pages and in many instances I complete what I start. However, both my choices didn’t work on multiple levels by page 20. I will start with the first: “Scented Dreams” by Jacqueline Turner Banks.

Let’s ignore the cover art, because it’s superficial to discuss something that has no relation to the actual story, even though sometimes the quality of the cover hints towards the worth of the novel. Banks knows how to write and keep the reader’s interest. Her vocabulary didn’t blow my mind, but a disaster she ain’t. The disaster, when considering the prose, is her abuse of the word laugh in all of its forms. In the first 18 pages, Banks uses this word above twenty times. That is at least one time per page, but Banks abuses it in clusters, often enough to drive any person insane. I know it is a small thing, but imagine walking 200 miles with a pebble in your shoe. I certainly do not want to find out how many times the word pops up until the end. Since I have a PDF review copy, I tried counting and gave up at additional 60 laughs, laughing, laughter. BEFORE I reached page 60. Small thing, people, but universally annoying. Is this novel the Joker? Can’t it not stop laughing?

I covered the small bit. Now on to the big ones. Banks clearly tries to experiment with points of view and it’s commendable that she wants to think outside the box. Everybody and their nana has read novels in which the protagonists take turns every chapter or so to tell the story. Banks goes for POV switches in the chapters, which would be fine, if there was an indication that the POV has switched like a paragraph break. But I couldn’t see any signs of transitions. Since both protagonists didn’t have individual sounding voices, it was harder for me to get who was in charge of the narration. I wouldn’t have minded it so much, because no novel is perfect, but Banks switches POVs during dialogs. Dialogs are hard enough to read, because a reader has to pay attention to who says what and it’s best to experience it through the eyes of one character. It’s just counterproductive to challenge your readers in such a manner, because POV switches during dialogs stressed me as a reader and I don’t read to feel stressed.

As I said, I would’ve ignored everything said so far, if anything happened in “Scented Dreams”, which didn’t. Twenty pages in and the characters drive to a hotel, check in and dine in a cozy place. Really? I needed to read about completely mundane things people do for twenty pages? I’m sorry, but I thought this was PNR and not 80’s-Fabio-on-the-cover-inspired romance. Come on… I don’t want to sound as if I know everything about writing and PNR, but normally the paranormal danger should’ve been presented by now and the alpha male should’ve been on it. Not in “Scented Dreams” though. I may sound cruel, but when the happy, flirty couple moved on to the bar to continue being flirty and happy without a sign that anything remotely otherworldly would make an appearance, I thought reading a non-fiction book by Martha Stewart would offer more thrills than this.

After the ordeal that was “Scented Dreams”, I decided to keep busy and read the next book in line, “Where the Rain is Made” by Keta Diablo. This promised to be an exciting time travel story set during a turbulent 19th century America, right amidst the Native American Wars. Tensions between the whites and Indians rose high at that time, which promised the very least a story to be told. The blurbs on the inside promised awe-inspiring, rich in history and with well wrought characters. You know, the whole package. Yes, I’m being sarcastic at the moment.

While I do agree that Diablo has found an interesting story – a romance between a time traveling Dog Soldier and a woman who passes herself as a man in times of war – I didn’t click with the writing. To me “Where the Rain is Made” is the poster child for uninspired. Diablo has gone for the obvious word choices such as ‘tearful farewell’, ‘collected his wits’ and ‘warm flush’ as if the time of the story can justify their use. The writing is not bad per se, but it lacks an individuality to set Diablo’s work apart from other books. Why should I care for a novel, which doesn’t strive to be anything more than what I have seen so far?

Diablo tries to poke the characters together to a bumpy romantic start with some trademarked and unavoidable bickering. Francesca isn’t really the bravest woman in the world, reading her escape as the Indians come to her cottage house. However, a few pages after she’s kidnapped and shown kindness, SNAP, she’s tough. Considering how women were shielded from anything gruesome, I don’t see how Francesca could anything besides cower. Yes, so she does pretend to be a man, but you could sense that she is a girly girl, therefore not really the kind to taunt the brutes holding big tomahawks. What’s more unbelievable is Meko’s retort:

“Didn’t your mother tell you not to bite the hand that feeds you?”

Technically, Meko hasn’t done anything other than kidnap and clean her face with a damp cloth in order to be entitled to use this phrase. Even sparing her life is not the right context to use it. I’m not even sure if the phrase has been coined during this period. The earliest mention I’ve found dates back to 1915, way after the Indian Wars. It’s simply too modern sounding.

Considering how this is supposed to be a historical romance, even praised as a magical one at that, I thought that it should’ve been the very least vocabulary conscious. Writing a successful historical romance and suspending the reader’s disbelief is in the details. Quite honestly selecting the right words for the time is vital for historical romance. Plus, the English language in 19th century America is not all that different from modern day English, so it would’ve been a big plus to keep true to the period.

What completely killed the mood for me was Diablo’s descriptions, which read like shopping lists with all the times following one after the other. Here is an example of what I mean:

“…mental inventory of the tipi. A shallow hole had been dug into the earth in the center of the lodge. Above it, a layering of stones supported a stack of charred wood. Smoke curled upward and drifted out an opening overhead. A collection of dried roots and herbs hung from a rope on one wall, their pungent aromas not altogether unpleasant.

The old woman pilfered a handful of stems and stalks from the reserve, and tossed a pinch or two into the fire. Aside from the strong scent of burning wood, Cesca detected a faint aroma of cherry and possibly lemon.

A sleeping berth of fresh pine boughs and animal pelts graced one corner. To her right, a pile of clothing and two leather pouches filled up a ledge above the bed. They resembled saddle bags painted in bright designs of green, red and yellow. Cattail mats canvassed the hard earth to keep the cold from seeping through. Much to her surprise, the floor wasn’t drafty or uncomfortable. The absence of weapons in the lodge led her to believe the woman lived alone.”

Sadly, this is the state of every introduction to a new character or a setting. I got a line by line description of The Sacred Council, Meko, the time traveler looks, the initial impressions of the village and the insides of this tipi.

In the end, I couldn’t even focus enough to read another sentence. It is unfortunate when it happens, but sometimes I simply can’t click with a novel (or two).

Verdict: Did Not Finish