Book Review: Every Other Day by Jennifer Lynn Barnes 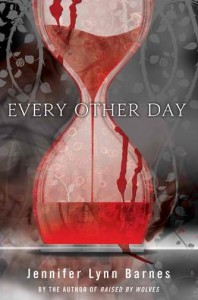 Title: Every Other Day

Every other day, Kali D’Angelo is a normal sixteen-year-old girl. She goes to public high school. She attends pep rallies. She’s human.

And then every day in between . . .She’s something else entirely.

Though she still looks like herself, every twenty-four hours predatory instincts take over and Kali becomes a feared demon-hunter with the undeniable urge to hunt, trap, and kill zombies, hellhounds, and other supernatural creatures. Kali has no idea why she is the way she is, but she gives in to instinct anyway. Even though the government considers it environmental terrorism.

When Kali notices a mark on the lower back of a popular girl at school, she knows instantly that the girl is marked for death by one of these creatures. Kali has twenty-four hours to save her and, unfortunately, she’ll have to do it as a human. With the help of a few new friends, Kali takes a risk that her human body might not survive. . .and learns the secrets of her mysterious condition in the process.

Stand alone or series: First in a new series

How did I get this book: Review copy from the publisher via NetGalley

Why did I read this book: I was intrigued the idea of a girl whose nature alternates every other day.

Just like Thea, I am in panic mode in this all-in attempt to read ALL THE BOOKS before 2011 closes so that I can come up with the most fair and informed Best of 2011 list as possible. Unlike Thea though, I have ZERO discipline and instead of catching up with the books that have come out early in the year and have been languishing in my TBR pile, I am reading books that are not going to be out till the end of the year. Every Other Day is one of them and I read it because the premise sounded so good and sometimes you must really follow your instincts, TBR pile be damned (sorry, TBR pile. I do love you).

Every Other Day is set in a world where Charles Darwin’s famous voyage to the Galapagos spawned not only the beginning of the theory of Evolution but also revealed to the world the existence of creatures hitherto thought to be merely mythical like Dragons, Chupacabras and Hellhounds, amongst others. These days, most of them have been catalogued, studied and some are even protected species despite their obvious threat to humankind.

Kali D’Angelo is your regular 17-year-old human girl. Or, mostly. Because every other day she is something else: something else that as far as she is aware, hasn’t been catalogued or studied. Something else that is powerful, super-strong, nearly indestructible and moved by the need to hunt and slay other preternatural creatures. She’s been keeping this a secret since she was 12 and without knowing WHAT she is, she has felt apart and lonely for ages. She has no friends, barely communicates with her father and mostly goes through the motions.

On one of the days she is human, Kali notices that Bethany, a girl from her school, has been contaminated by a Chupacabra, a powerful parasite whose mark means death to any human. Moved by instinct and her knowledge that at dawn she will be more than human and will be able to kill the creature, Kali manages to transfer the mark to herself, opening up a can of worms by doing so. First of all, when dawn comes and she is not human anymore, not only the creature seems to be a perfect fit, heightening her powers but through the Chupacabra she is also able to psychically connect to another person who seems to know what she is, a guy named Zev. Unfortunately for her, the presence of the Chupacabra at their school was not a random accident and soon Kali and her new-found friends Bethany and Skyler (who is a bit psychic) find themselves at the centre of a scientific conspiracy.

Every Other Day is a cool mixture of Urban Fantasy and Science Fiction and it has a lot going for it. The pacing is incredible with non-stop action (the whole story takes place over the course of merely two days). The twists keep coming and the sense of danger is present throughout. The author does not shy away from it, there are never cop-outs and the story is much darker and much more violent than I anticipated it would be. A lot of Paranormal/Fantasy YA these days deals with supernatural creatures but they are usually de-fanged beyond recognition. Not here, what/who Kali is on her non-human days is a wondrous, powerful, truly scary thing.

The premise itself is an interesting one because it adds not only tension with Kali usually waiting for her non-human days to be able to use her powers but also gravitas to her arc: every day she literally dies. She is never fully human nor is she that other thing. She is not only different but she feels differently every other day. This dichotomy, the moral conundrums about her humanity or lack of, she finds herself grappling with, are fascinating and mostly well explored by the story.

What I loved the most about the book though were the three female characters and their relationship with each other. They are three fantastic girls, with different personalities and motivations. They exist on their own grounds and I loved how they are not framed by their relationships with boys. I am sure that Skyler, with her psychic powers is supposed to be darling of the story, but Bethany, the popular cheerleader was awesome. She is not exactly the nicest person around and I loved her to bits because she had many other facets that were slowly revealed without making her any less popular, or demoting her from her top place at school. A lot of times I feel that the Popular Cheerleader has to be brought down in order to grow as a character and I really appreciated that Bethany went through stuff without having to lose part of who she is.

On the down side, there are three things that kept Every Other Day from being the excellent read it could have been:

1. The inordinate amount of repetitious inner-monologue. Kali constantly repeats how “people like me are” followed by a breakdown of her abilities over and over again. I get it: I understand that this works as a means to create an identity for herself but it is really, really tiresome;

2. The “romance”. Calling the relationship between Kali and Zev a romance is almost a misnomer because it is so secondary to the plot as to make it almost an after-thought but there were things about it that gave me pause. When Kali finds out what she is, she also finds out that her species comes in pairs and this brings an almost immediate connection with Zev who is supposedly her other “half”. I felt uncomfortable about what seemed a glaring absence of any questioning whatsoever about this obvious lack of choice. Having said that, I though the resolution for their connection to be excellent and I believe there is scope for growth and discussion in future books.

3. The ending and how it connects with the overall world-building. Without spoiling, the ending brought forth revelations about certain things and about the nature of certain people that it was unnecessarily convoluted. This is very unfortunate as up to that point, I was actually digging the worldbuilding.

Despite these criticisms, I actually quite enjoyed reading Every Other Day and thought it was a solid albeit flawed debut to a series that has a lot of potential for growth. Here is hoping.

The decision to make hellhounds an endangered species was beyond asinine, but I expected nothing less from a government that had bankrolled not one, but two, endowed chairs in preternatural biology (one of them my father’s) at the University That Shall Not Be Named. The same government that thought you could train a hoard of zombies just as easily as Pavlov’s dogs.

Reading Next: I DON’T KNOOOOOOOW.

Ebook available for kindle US, kindle UK, and nook