Stand alone or series: Book 3 in the Succubus series

Why did I read this book: By this point, it should be pretty self-explanatory.

Summary: (from KensingtonBooks.com)
Some days, a girl just can’t catch a break…

…especially when the girl in question is Georgina Kincaid, a shape-shifting succubus who gets her energy from seducing men. First there’s her relationship with gorgeous bestselling writer Seth Mortensen, which is unsatisfying on a number of levels. It’s not just that they can’t have sex in case Georgina inadvertently kills him (generally a turn-off for most guys). Lately, even spending time together is a challenge. Seth’s obsessed with finishing his latest novel, and Georgina’s under demonic orders to mentor the new (and surprisingly inept) succubus on the block.

Then there are the dreams. Someone, or something, is preying on Georgina at night, draining her energy, and supplying eerie visions of her future. Georgina seeks answers from Dante, a dream interpreter with ties to the underworld, but his flirtatious charm only leaves her more confused—especially as the situation with Seth reaches crisis point. Now Georgina faces a double challenge—rein in her out-of-control love life, and go toe-to-toe with an enemy capable of wreaking serious havoc among mankind. Otherwise, Georgina, and the entire mortal world, may never sleep easy again…

Succubus Dreams marks a new chapter in Georgina Kincaid’s long, complicated immortal life. Things with boyfriend writer Seth are coming to a point–in addition to the sex issue, there are also the myriad problems most relationships go through. Communication breakdowns. Trust issues. And yeah…no sex. Things are becoming increasingly hard to smooth over in this relationship–especially after a near death experience leaves Seth with a more ‘you only live once’ mindset.

Also on the scene in this book is the brand shiny new succubus named Tawny–an anatomically impossible blonde who can’t seem to score a lay–and her imp Niphon. Niphon also happens to be the same imp that bought Georgina’s soul so many years ago and for some unknown reason he is determined to make life miserable for her, refusing to leave until Georgina can mentor the terribly inept Tawny into scoring her first customer. Also in town are a group of new angels, helping Carter on some top secret business for the operation upstairs. Georgina befriends two of these new characters, the angel Yasmine and the mysterious human Vincent, whose relationship seems strangely familiar to Georgina and Seth’s current situation.

Then, there are the dreams. Every time Georgina scores a fix of energy by seducing a soul, she has incredibly vivid, recurring dreams. And upon waking in the morning, she finds that the energy she has just taken is completely drained from her–bad news for an immortal creature whose existence depends on life force energy. Since Jerome, Georgina’s boss, is out of town on urgent top secret demon business, she’s forced to turn to Erik (remember him from Succubus Blues) and the shady Dante–a human whose soul is so dark and tainted, his place as a citizen of Hell in the afterlife is all but certain.

Something I’ve noticed about Richelle Mead’s Succubus books is that the plotlines aren’t really the driving characteristics of these stories; instead they serve as sort of catalysts to put Georgina in different situations, as a jumping off point to push Georgina’s relationships. Not to say that the story directions are weak in any way–the plot here in Succubus Dreams, involving a mysterious energy drain on Georgina as she sleeps, is as well written and compelling as everything else. But the overall mystery of who or what is behind her vivid dreams, just as the ambrosia storyline in book 2, takes a backseat to this very character-driven book.

Something exciting and different in this instalment from the first two is the more serious direction Georgina’s story takes–and the beginnings of a much larger, darker storyarc ahead. While the cause of her dreams is nicely resolved in this book, the meaning behind them remains a mystery. The last conversation Georgina has with Carter also weighs heavily on the mind, and I am eager to see how Niphon’s actions here play out in further stories. While the first two books felt very…foundational, Succubus Dreams dares to go there. I sound very cloak and dagger right now, but I don’t want to spoil anyone. Suffice to say, that this is a darker turn for Georgina and one that I embraced with open arms. Even if it hurt my heart. This is a ballsy move by Ms. Mead, and one I wholeheartedly applaud her for.

Again and again, we see Georgina make the same sort of martyred mistakes. For a shapeshifter, Georgina strangely chooses to wear the skin of a knockout bombshell, in part because of the pain it inflicts on her–that she just might find that perfect guy like Seth, and then get to deny herself the pleasure of truly being with him. Georgina’s whole modus operandi for the past millennia revolve around this sort of self-inflicted pain and martyrdom cycle–she wants to integrate herself with the human world, making close friends and possible lovers, only to have them yanked away from her by their own mortality. While this thread began in Succubus Blues and was touched on in Succubus on Top, Dreams revives this trait of Georgina’s brutally. Almost sadistically, Ms. Mead lays bare Georgina’s past blunders, flashing back to her mortal life in Cyprus and contrasting that with her current relationship with Seth, and the star-crossed relationship between Yasmine and Vincent.

As I said in an email, dammit, I want Georgina to learn from her mistakes. I want her to grow…but for now, this book takes things in a painful, dark direction that must needs be taken. And I am loving every minute of the ride.

Notable Quotes/Parts: Two sections. First, a characterization of Tawny and her unique problems in getting a job.

“Okay…” I wondered if maybe I should have read the mentor’s handbook after all. “Let’s see it.”

Tawny looked around the room in terror. “Here?” she squeaked. “In front of you?”

“Tawny,” I barked. My voice held the authority of a drill sergeant. She jumped. “I am not making out with you until the end of time. You want to do this, then you’ve got to work for it. Now, take off your clothes.“

“Oh,” said Hugh. “I’ve waited ten years to hear you say that to another woman.”

I found my stereo remote and turned it on. “Tainted Love” started playing.

“I can’t strip to the eighties!”

With a terrified look in my direction, she moved to the center of the living room. At first, she just kind of stood there, and then, slowly, she tried to step in time to the music. I say tried because she was so off the beat, it was astonishing. I don’t think I could have been that out of sync if I’d tried. Finally, she gave up moving her feet at all and simply focused on her upper body, swaying her arms and torso slightly. It was the most awkward, uncomfortable spectacle I’d ever seen.

Another favorite scene of mine involves the Mortensen family, and the Industrial Revolution version of Monopoly. Hilarious! For example:

“That’s not as much as I had to pay when the Factory Acts cut my child labor force a couple turns ago,” Maddie pointed out.

And so very informative too.

Additional Thoughts: In my opinion, this is by far the best cover for any of the U.S. Succubus book printings. I love the sexy backless dress–definitely an improvement over the Georgina from books 1 and 2. But, this cover still ain’t got NOTHING on the beautiful German version of Succubus Blues: 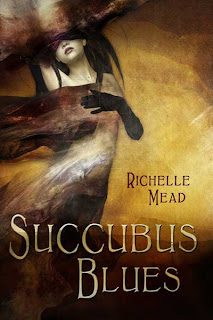 Verdict: Whatever mild reservations I might have had from the second book, this third entry dispelled them completely. I loved Succubus Dreams, even more so than Succubus Blues. This book takes a darker, more heart-wrenching turn, and had me thinking about it days after finishing the last page. This one is definitely in the running for one of my favorite books of the year–Richelle Mead just gets better and better. How long before Succubus Heat comes out?

Stick around tomorrow for our interview with Richelle, and for a chance to win a copy of Succubus Dreams!!!