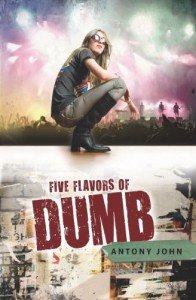 The Challenge: Piper has one month to get the rock band Dumb a paying gig.

The Deal: If she does it, Piper will become the band’s manager and get her share of the profits.

The Catch: How can Piper possibly manage one egomaniacal pretty boy, one talentless piece of eye candy, one crush, one silent rocker, and one angry girl? And how can she do it when she’s deaf?

Piper cannot hear Dumb’s music, but with growing self-confidence, a budding romance, and a new understanding of the decision her family made to buy a cochlear implant for her deaf baby sister, she discovers her own inner rock star and what it truly means to be a flavor of Dumb.

How did we get this book: We both bought our copies

Why did we read this book: Five Flavors of Dumb is one of the finalists of Nerds Heart YA, the tournament for under represented YA Literature along with What Momma Left Me which we reviewed last week. We are the judges of the final round.

Five Flavors of Dumb was one of my notable reads of 2010 and I was super happy when I heard it made the final of this tournament. I think this is a book that celebrates diversity in a very positive, uplifting way and it well deserves to be in the final. In the interest of being totally fair, I decided to read it again to see how it would fare on second reading. And do you know…I still love it.

I still feel this book is well-written, engaging, with a bunch of vivid characters and a lot of fun. Having said that, I do have to say that perhaps the book is too neat – every single problem is resolved by the ending, all problems addressed. It is perhaps an unrepentantly happy book – not that there is anything wrong with that.

Since this is a tournament to celebrate diversity in books, I have of course to address the fact that the main character Piper, is deaf and I will quote from my original review since my opinion hasn’t changed about that:

And finally, of course there is the fact that Piper is deaf. That put me on guard before starting the book as I was worried that her hearing impairment would be the beginning and the ending of her characterisation. But being deaf is not what defines Piper as a character at all. It is of course part of who she is, how she interacts with the world and the people and a source of conflict especially amongst her family like her father’s horrendous lack of skill when dealing with Piper and avoiding sign language like the plague even though it’s Piper’s favourite way of communication. Speaking of language, I love how Piper observes how different people use the sign language in different ways to talk to her: some use it as a way to soften her up, because no matter what she always felt gratitude when someone uses it but also there are other characters who learn it as a way to show her how they respect her.

Piper is an awesome character: she is smart and resourceful. But she is also a bit of a prick when the book starts, judgemental and even resentful of her baby sister and that makes her even more awesome because she feels like a real person, with all the good and bad, instead of a Pollyanna-type character. It is easy to understand too, both her behaviour and also that of her parents – just imagine the situation they are in: three kids, one completely healthy, one whose deafness developed over time and one who is born deaf but who with an operation would no longer be. How to deal with all of it? It is a hard situation with no easy answers and I think that the author addressed it all really well.

As I said in our last review for this tournament, contemporary YA is not really my forte. I had heard of Five Flavors of Dumb not just from Ana and her review last year but from other reviews across the blogosphere, so I was at least familiar with this title when I started reading. And you know what? This is one lovely, charming, uplifting book. I agree with Ana on all counts – the book is well-written and the characterizations are the heart of the novel, particularly Piper’s narrative voice. The frustration that Piper feels with her family is painfully rendered and powerful. The relationship she has with her parents – her anger with her mother and distant, resentful father as they dote on Piper’s baby sister Grace (who was born deaf but because she’s so young was given an expensive transplant with money taken from Piper’s college trust) – is a layered, complicated thing. Her relationship with her brother, Finn, is also a complex creature, as – how many several years older siblings are wont to do – she tends to underestimate, misunderstand, or even ignore her freshman brother. There’s also Piper’s relationships with the band, Dumb, and how she becomes their manager and helps maneuver them into the limelight with a climactic final performance. I loved the time spent with the female members of the band, with curmudgeonly Tasha and (supposedly) vapid Kallie and how they are revealed to be so much more than appearances suggest. In contrast, the male band members are slightly underdeveloped (with the exception of Ed, who is awesome), but since the other characters and Piper, in particular, are handled so well, I can hardly complain.

On a tangential note, I also loved the very clever way of introducing younger readers to rock icons like Nirvana and Jimmi Hendrix – because Piper is deaf and doesn’t have that grounding in musical history, as she learns their stories, new, younger readers that don’t necessarily know about these legends also get indoctrinated – and never once did this feel inauthentic (it’s ingenious, really). Five Flavors is as much about a girl finding her voice and growing up as it is a tribute to Seattle – not just musically, but also with subtle odes to the city itself (even down to the weather and love of coffee). But I digress.

At the end of the day, Five Flavors of Dumb is a fairy tale. It’s the story of a struggling band trying to make it, filtered through the unique perspective of a band manager who happens to be deaf. Along the way, even if the band doesn’t make it, each of the characters learn something invaluable about themselves and each other, and grow because of it. My only criticism for this novel isn’t really a criticism at all: the story is sweet, happy, uplifting, and…well, like a fairy tale. There’s nothing wrong with that at all and does not diminish my love for the novel in any way – but it does mean something in the context of this Nerds Heart YA Tournament, in my opinion.

Ana: Abso-freaking-lutely. Now the hard thing will be to decide between this one and the other finalist as they are both so good and deserving but in different ways.

Thea: I think this is a fantastic, lovely, fairy tale of a book and I thoroughly enjoyed it from beginning to end. I completely understand and support the fact that it is a finalist in this competition. After finishing this one, though, I immediately knew which of the two NHYA titles would be my pick for winner.