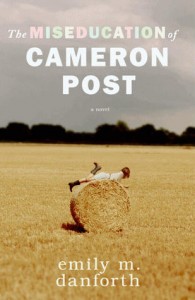 When Cameron Post’s parents die suddenly in a car crash, her shocking first thought is relief. Relief she’ll never have to tell them that, hours earlier, she had been kissing a girl.

But that relief soon turns to heartbreak, as Cam is forced to move in with her conservative aunt Ruth. She knows that from this point on, her life will forever be different. Survival in Miles City, Montana, means blending in and not making waves, and Cam becomes an expert at this—especially at avoiding any questions about her sexuality.

Then Coley Taylor moves to town. Beautiful pickup-driving Coley is a perfect cowgirl with the perfect boyfriend to match. To Cam’s surprise, she and Coley become best friends—while Cam secretly dreams of something more. Just as that starts to seem like a real possibility, her secret is exposed. Ultrareligious Aunt Ruth takes drastic action to “fix” her niece, bringing Cam face-to-face with the cost of denying her true self—even if she’s not quite sure who that is.

The Miseducation of Cameron Post is a stunning and unforgettable literary debut about discovering who you are and finding the courage to live life according to your own rules.

Why did I read this book: I love Contemporary LGBT YA stories and this one has been highly recommended all over the internets.

It starts the summer when Cameron’s parents die suddenly in a car crash, the very summer when she has her first kiss with a girl, her best friend Irene. Her first reaction upon hearing of her parent’s death is that of relief: they will never have to know about her and Irene. The guilt that follows – guilt for feeling relief, guilt for having being with a girl – is all-consuming. In the aftermath of her parent’s death, Cameron’s conservative aunt Ruth moves in to take care of her and in the ensuing years, Cameron lives a secret life of crushes and hooks up with other girls – flying under her family’s radar. Then Coley Taylor moves to town and Cameron falls in love with her. The two become friends and then to Cameron’s surprise, something else develops between the two girls when Coley’s boyfriend is away for that summer. Until Coley, consumed by guilt and shame, exposes their relationship to her family and their church. Horrified, Aunt Ruth sees no alternative than to send Cameron to Gods’ Promise, a religious Boarding School designed to “cure” Cameron of the sin of homosexuality.

The Miseducation of Cameron Post is a coming of age novel that follows young Cameron Post from the age of 12 to about 17. The book is narrated by Cameron in first person, from a point in the future – after she’s left God’s Promise.

I am not sure how to write my thoughts about the book. On the whole, I did really enjoy it, I think it is an important story for many reasons but there is a degree of disconnect between the book and I that prevented me from truly loving it.

This sense of disconnection comes from Cameron as a character and how she presents herself to the world. Her narrative is very, very detailed and sometimes even emotionally detached. Although I understand that part of it comes from trying to deny her own emotional state after her parent’s death as a means of self-preservation, this didn’t quite work, especially when you consider that she is narrating it from a point in the future, when these things have been resolved. The extremely detailed narrative sometimes loses itself in small, inconsequential details – I felt the book was overlong because of that. Another thing that made me pause is how everybody seems to love or want Cameron – all the hot girls and even some of the hot boys. There is hardly any relationship between her and other characters her age (and some a bit older) that doesn’t have a sexual element to it. I do understand that part of this coming of age novel isabout sexual development and some of these relationships developed into friendships but this seemed a bit extreme.

Having said that, this is a really well –written novel, the prose is self-assured and the story, once you remove the extras, is well-developed. The parts of this story that deals with Cameron’s feelings and her slow development, her growing up to understand herself in the face of the world, her family, her church and her beliefs are easily my favourite. I love coming of age stories and this is a really good one. I loved for example, how in the early years (set in the 90s) Cameron found succour in the movies she rented – and how she was constantly looking for scenes or movies with LGBT content. This only reinforces how stories like this very one are so important for teens that are struggling with their sexuality or starting to realise they might be gay – especially if they stem from conservative backgrounds.

This brings me to another point that might explain my detachment. Cameron goes through a lot in a very lonely, quiet way – part of it due to her circumstances (small town, conservative religious family) and her own character but the narrative itself is very subdued and subtle as well. This is even clearer when it comes to the boarding school God’s Promise and what they did to the kids there. The story shows quite a lot of sympathy for the people working at the school. It shows how complicated, how complex the relationship with people who genuinely believe they are right when they say that homosexuality is a sin and a choice you make and who believe they are helping you can be, especially if they are loved ones. Cameron’s relationship with her beloved grandmother is one of these and it almost broke my heart. Her patience and understanding for those people working at the school are incredible and the very real fact that some kids also believe what they are told and how in time, even Cameron started to have doubts seemed very realistic to me even as it was extremely frustrating at times. I really did HOPE and WANT a Hollywood ending for this. An ending in which not only Cameron left this school but also an ending in which that place was closed down by authorities or was burnt to the ground or destroyed by meteors or something. That said, the ending we did get is still awesome and fitting to this novel.

Interestingly enough, despite the fact that the school carries on and the people working there are portrayed with a huge degree of sympathy, there is absolutely no doubt about the horribleness of the place and how abhorrent the mere idea of conversion therapy is. I understand from this author’s interview that some reviewers took offense from the fact that there is no clear condemnation of conversion therapy in the book – I couldn’t disagree more. Despite all the sympathetic descriptions, despite all the “good” characters, it is very clear to me (and to Cameron) how that place is an absolutely horrendous place BECAUSE of those things. Behind the façade of love and care, the emotional abuse that the kids go through is beyond comprehension: they are taught to hate themselves and to fear that their souls will be condemned forever if they don’t choose to change. I can’t imagine how that must feel.

I seem to have a personal preference for out, loud and proud stories but the quiet and sober ones like The Miseducation of Cameron Post are equally as important.

Notable Quotes/ Parts: You can read an excerpt HERE